Conference Theme and how it can Generate Hope for Organisational Change

“People need to be able to hope, to engage in the process of change.” Evan George, BRIEF (UK)

There is anecdotal evidence, about Steve de Shazer saying that ‘progress’ was the most important word in the Solution-Focused approach. To identify progress means to notice signs which show that (some of) what is happening fits with clients’ desired outcome. This reinforces the invested effort. It’s worth asking about the exact ways people contributed to the observed progress; in response, we receive descriptions of resources and specific ways of doing things, which we recognise and reinforce, too.

‘Progress’ is also a widely used word in the corporate world and is a usual, basic desired outcome. Beyond forcing or even just ‘making’ progress, Solution Focused practitioners invite others (and themselves) to notice signs of progress. Noticing signs involves much less effort, but much more interaction around desired directions, measures of success and personal contributions or the contributions of others. Exchanging about these, in detailed and “ritualised” ways in an organisation allows a smoother collaboration and better self-organising around the company strategy. For ritualization of such conversations by a leader see this story in the footnote. This I call one of the Solution-Focused twists around progress: noticing signs of progress, instead of wanting or planning to make progress.

The second twist is to inquire and interact deliberately about (possible) signs of progress, no matter if they already happen, should happen or might happen; so people discuss past, current or future signs of progress in a detailed, “movie like” way. Who’s doing what exactly, so we can say this fits with what’s wanted? On top of this, people describe the useful, meaningful difference, which the observed detailed action makes.

The energy for continuing

There might be a discussion on what to consider as successful if it’s about organisational change, since every project is different and success is a matter of definition. However, interrupting, not sticking to the original aim, is usually considered a failure. I love the example which I heard about at the SOLworld CEE conference in Timisoara. A manufacturing company initiated a large change project, and after good initial acceptance, some turbulence occurred. The CEO decided not to follow through and to use the resources for the everyday business. The external consultant, who happened to be a Solution-Focused practitioner, suggested a final intervention and interviewed the leaders in the company on signs of progress since the beginning of the change project. As a surprise, it turned out that those who were involved could name many changes in the direction aimed for and felt most of the restructuring was already underway. In addition, they reported some advantages also for their daily struggle with the new turbulences. Hearing this, the CEO was convinced to follow the original aim and pursue the change project. The involved managers were motivated and continued improvements.

Another story on how watching out for signs of progress can make a good difference is from a business unit of an international company. After several structural troubles and non-transparent decisions, the two higher levels of management met for a two-day retreat, coached by an external SF practitioner (me ). There were many issues of trust, and the confidence that they would manage to reach sustainable improvement was rather low. During the retreat, some of them were deeply surprised to see how far they got and how many clear decisions and commitments there were.

It was important to me to interview them about possible signs of them maintaining the progress after the retreat. I framed it not as promised actions, but imaginable signs. They took notes on them. After two months, during a meeting, they answered an online rating survey to show, which of the signs they could observe more or less often. The confidence and motivation towards the desired direction increased as they could see that most of the signs happened during everyday work.

Current and hoped for signs

Within the board of a not-for-profit organisation, a team member, to start a Board meeting, initiated a short interaction on the collaboration among the Board members. She invited them all to rate the quality of the current collaboration on a scale of 1-10, secretly; ’10’ being the most meaningful and smooth work they can imagine to be involved in and ‘1’ the opposite. They were invited to share signs which told them that they were not lower on the scale and write these signs on cards. In a second step, Board members were invited to suppose that they climbed the scale by just one point. They shared, also in writing, several signs how they would notice this. At the close of the intervention, they mixed all of the written signs and read them out, commenting that they are currently or very close to reaching signs of the Board moving in the direction of a meaningful collaboration. Sharing the signs allowed them all to get more details about the observations and wishes of each other, without the painful discussion of views on how far they are. Board members and others reported a reinforced commitment towards the work in the board after this intervention.

Thank you for reading so far, which might be a sign of some resonance with what you have read so far? Please, follow in your work your best ideas, reinforcement or inspiration, from it. What difference would that make? How would you notice it is going into the direction you hoped for?

Dominik Godat (2019): The App-Store of Development instead of labelled SF versions

Harry Korman (2017): VERSION 3.0 OF “REFLECTIONS ON MARKS’S PAPER SFBT 2.0 – THE NEXT GENERATION OF SFBT HAS ALREADY ARRIVED” 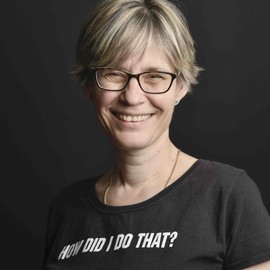 Katalin Hankovszky Christiansen M.A., PCC is an independent trainer and coach. Coming from a pedagogical background, she has work in the business and training environments since 1995.